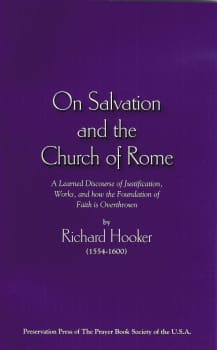 On Salvation and the Church of Rome

Originally titled A Learned Discourse on Justification, Works, and How the Foundation of Faith is Overthrown|
by Richard Hooker (d.1600)

Hooker is amongst the most important of Anglican theologians and his fame rests particularly with his book, Laws of Ecclesiastical Polity, which is a massive defense of the Church of England and its Reformed Catholic Faith.

He also wrote other things and of these none is more important than his Tractate of 1586 which deals with these themes: — What is the foundation of basis of Christianity? Does the Church of Rome hold to the true foundation? In what ways does the doctrine of justification believed, taught and confessed by the Church of England differ from the doctrine of the Church of Rome? And what are the basic differences in mindset between the Puritan and the Anglican within the Church of England with its Elizabeth Settlement?. This Tractate began its existence as several sermons preached in The Temple Church, London to barristers.

Hooker’s literary style is polished but difficult for many people today to appreciate and master, due to the long sentences and complex syntax. Therefore, in this booklet of 64 pages the Discourse has been carefully rendered into a simplified English in order to make more accessible Hooker’s profound teaching to those who struggle with his difficult style. There is a historical and theological introduction before the Text of the Tractate as a further help to the reader.

We are happy to accept orders from anywhere in the world. For overseas orders, if the actual postage cost is significantly greater than the amount calculated at checkout, we will contact you to request an additional contribution to the postage charges before we dispatch your order.